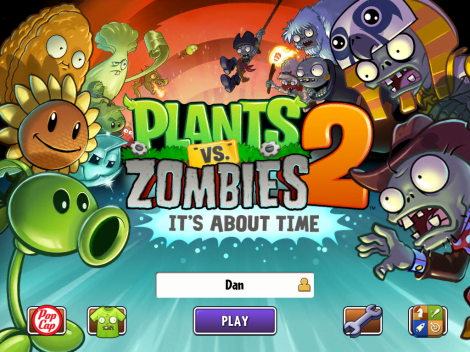 From the get go, PvZ 2 wants you to make a new profile, and instantly suggests you connect to Facebook. You’re given no additional features for connecting, EA just wants your information.

Plants vs Zombies 2: It’s about time, is the sequel to the hit franchise, Plants Vs zombies, a game that came out of nowhere but left a lot of gamers, casual and hardcore alike, wanting more. PvZ 2 has already changed in big ways compared to its predecessor, being a iOS exclusive for the foreseeable future, and changing the way the game is bought, and in turn, played. Is this sequel a fantastic instalment in Pop caps ambition to become the best casual developer out there? Or have they over-reached their mark?

The premise of PvZ 2 is simple: Zombies continue to bombard your house, wanting to eat brains, but the main antagonist this time is Dave, the crazy shop merchant from last time. Dave just ate the best taco he’s ever eaten, and instead of making another, decides it’s easier to travel back in time to eat the exact same taco again. It sets up for a variance of different locales and different enemies to keep users entertained, and allows for some creative freedom from the artists. If you’ve ever played PvZ or any tower defence game for that matter, than you’ll know exactly how to play PvZ 2. You collect sun which randomly appears or is generated by sunflowers, and use this sun to create a defensive line to your house, using different plants to maximum efficiency depending on the zombies that are attacking. Each round is different, so you should think about the best combination of plants to take on the given zombies in any scenario, sometimes, I’d find myself in a awkward situation, thinking I’d found the perfect combination from an earlier level, just to be screwed over when a new type of zombie comes along which destroys my plans.

New enemies certainly add a new level of difficulty to the game, and give variety to an otherwise familiar game.

Sooner rather than later, the game gives you access to plant food: a new perk that allows a single plant that is fed this wonderful item extreme abilities; place it on a sunflower, and you’ll get 150-200 sun instantly, place it on a pea-shooter, and it’ll become a machine gun of a plant, easily able to take down a menacing line of enemies. Plant food is readily available throughout a level, being given to the player quite generously through killing green zombies, and given that it feels like cheat, it makes sure that you have some risk/reward scenarios where you’re not sure when or where to use your plant food. Another new set of perks are the three gestures in the bottom right corner: pinch, swipe and touch. Each perk allows the player to kill zombies on the screen using a different gesture, the pinch one is cheapest, but you have to pinch each individual zombies head to kill them. All these gestures come at the expense of your hard earned cash: a rare commodity in this game, and a asset you can buy from the store using real world money at any time. I’ve found that I haven’t needed to spend real world money yet, but repeating levels is certainly getting harder, and eventually, I will need to use those coins I’ve so desperately held on to.

For a casual game, PvZ 2 certainly pushes you to experiment at the risk of failing; sometimes you’re lucky and can screw up your placements but still pass a level, other times PvZ 2 will punish you for even a second of missed opportunity to spend your sun. It’s a unforgiving system, and one that adds to peoples frustration and can be seen as a cash grab by EA to make you buy more perks in the level. Now some people may see this as a attempt to get you fishing into your wallets for cash to buy short term perks, which can be used during a mission, and I can’t blame people for thinking that way, but it is just randomness. I’ve done levels multiple times, sometimes I do it no problem using the resources I have, other times I genuinely do need to use the perks otherwise I wouldn’t stand a chance in hell. Overall, it’s a nice balance, Popcap have managed to balance the difficulty to make it hard enough for hardcore players, whilst also being difficult enough to push pennies out of casual folks.

The store is where you really see why PvZ 2 is a free to play game. Next to everything has been monetized, from the gameplay itself, through to the locking of doors that hold power-ups, or even some amazing plants from the original. It’s a shame that EA see’s us consumers as cash cows, and treat us as such.

Worlds are varied, and Popcap looks set to release more as the months go on. As of writing, there’s only 3 worlds available: Egypt, Pirate and Wild West, with the future land locked until a later date. They give a nice variety to an otherwise stationary game, and push your strategy to it’s limits, constantly pushing you back on your arse if you don’t mix things up at all. Take, for example, the Wild West world, where train tracks are put on the levels with a cart, so you can only plant one plant on that row (with the added advantage of moving it up and down), If you place one lone pea-shooter in one of these in the start, then you’re pretty screwed for the rest of the level. One frustration most players will find is the constant grinding needed in order to get from one world to the next. This all starts when you think you’ve finished a world by getting to the end, but no no no, this wouldn’t be a F2P game if it were that easy. Instead, once you reach the end, stars appear under every level you’ve already finished, allowing you to go back to previously finished levels and do challenges on them in order to achieve enough stars to progress onto the next world. It’s an annoying system, one which really makes a player grind just to see a glimpse of the rest of the game. Putting barriers up like this is a common trope of the F2P model, it stops the players progress to tempt them into paying to continue, something which in my opinion, shouldn’t exist at it stops a players immersion. 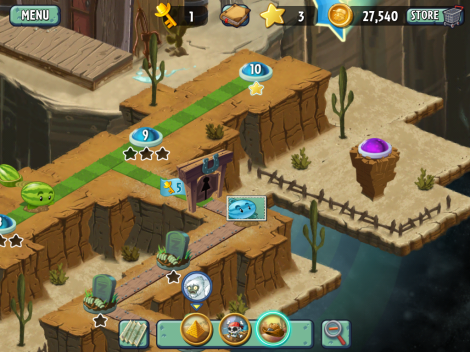 Special plants or abilities are hidden behind walls that require keys. These keys are appear from killing zombies within levels and are dropped at random, but with all things in PvZ 2, you can pay to get rid of these doors and have access to the prizes behind them!

It’s hard to come up with too many disadvantages for PvZ 2, it’s a bloody good game in it’s own right, from graphics to gameplay, it’s as good as the first, and even better in some places. Where the game falls short though is the constant hindrances to remind you that you should and could pay for everything in the game. If EA/Popcap had just made this another £15 game for every platform and maybe added the tropes for iPhone, it’d have been a lot better received, but alas, selling a game like this takes the soul out of PvZ, which once that’s gone, what does PvZ have left? Nothing but a shell of its former glory.