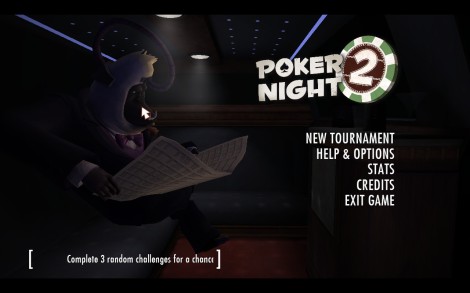 I don’t know who this bloke is, but he seems pretty cool, and giggles every now and then, so I’m happy.

For this week I wanted to review Poker Night At The Inventory, the first Telltale Games poker game, but I found that everytime I went to start a new tournament, the game would crash on my Mac, and since I have no access to a PC at this moment in time, I had to make do and play the second game in the series. This isn’t a bad thing at all, in fact I’ve heard the second game is definitely a lot better than the first, it’s just that I wanted to see the evolution of the series for myself, not take other peoples word on it. So without further adue, here are my impressions of Poker Night 2 by Telltale Games.

So this is the whole crew of Poker Night 2, with GLaDOS being the dealer. It’s a nifty team, with personalities mixing to make a great atmosphere for Poker. From left to right: Brock Samson from Venture Brothers, Claptrap from Borderlands 2, Ash Williams from The Evil Dead and Sam from Sam and Max.

So as you can tell from the title of the game, Poker Night 2 is a game about poker, with a sprinkling of recognisable characters as your rivals.This adds a nice spin to the traditional poker game as you enjoy listening to characters converse about a range of subjects, from what it’s like to be a Dog (Sam has some good answers) to what it’s like having your face plastered all over signs across Pandora. (Claptrap is pretty witty in his response).

Theres not much to be said about the game of poker itself unfortunately. Poker Night 2 gives players the choice of Texas hold ’em, or Ohama rules, which is all fine and good for a poker game, although more rule sets could have been chosen. You’re always given $20,000 to start a tournament, and this money is completely imaginary, none of your own money (bar the purchase of the game itself) is used. It would have also been hilarious to have a strip poker version, as the money has no value, and it would have been fantastic to hear Brock or Sam get annoyed at losing a hand. 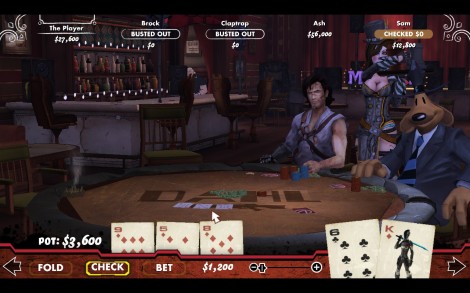 You can buy characters drinks using tokens you earn by winning tournaments. The drunker a character gets, the more tells they have for when they’re bluffing. Also shown is the Borderlands deck of cards.

What really differentiates Poker Night 2 to other poker games is it’s unlock system, in which there are 2 different types of unlocks. The first is when you win a normal tournament , which gives you tokens to spend as you please. These tokens can go towards buying new decks of cards, new chip designs, new boards to play on, and finally, drinks for characters whilst you’re playing a tournament (in-game unlocks). The second type of unlocks are rare and happen when a character bets a valuable object of theirs for the winner of the tournament. These unique objects allow the player to unlock content in other games, for example costumes in Borderlands 2 and Team fortress 2. From my point of view, the latter unlocks seem to be a purely commercial part of the game, an incentive if you will, of players who are huge fans of other games getting as much content as they can for the games they love. The £3.99 price tag then is really a piece of DLC for Borderlands 2 and Team Fortress 2.

By itself, the game is OK, it doesn’t break any new ground when it comes to Poker, and definitely has charm, but I can’t help but feel the only players who are going to find the best value in the game are those who own both Borderlands 2 and Team Fortress 2 in steam and want more content for them. Otherwise I don’t think the characters alone are enough to detract hardcore poker players away from the hundreds of free online poker games, and with a £3.99 price point, I think Telltale Games know this too.